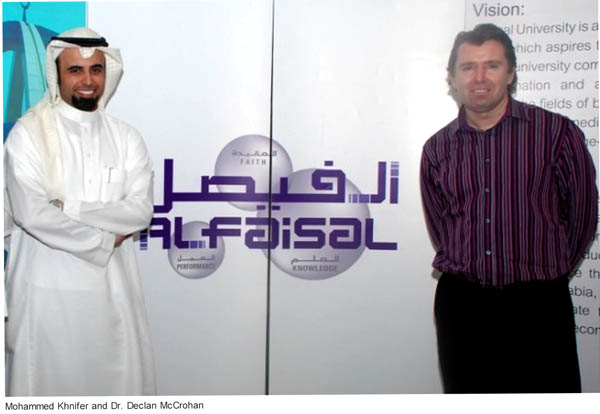 Undergraduates at Alfaisal University’s College of Business have completed what could be the world’s first case study on the structure of Goldman Sachs Sukuk; Mohammed Khnifer visited them as guest speaker to share his experience.

In its aim to bridge the gap between business theory and practice, the nonprofit university, which was founded by a consortium of Harvard, Cambridge and MIT, invited Khnifer to share his experience with undergraduate business students majoring in the field of finance. “The Goldman Sukuk experience is leading a lot of people in the industry to rethink what are our true values. It has done the market a big favour,” said Khnifer in his speech to the university students.

“One hundred and sixty days ago, a research note was published with the mere intention of alarming the Islamic industry that we are about to lose track of our core principles. Looking back now, I would say our industry has come a long way ever since. Now we are gradually hearing vocal voices that call for institutional reform and closer scrutiny of Sukuk issuance.
“Some scholars are calling for a robust framework of Shari’ah governance for the betterment of the industry. Sukuk Arrangers, on the other hand, are taking seriously the “reputational risk” into consideration before accepting any mandate from a conventional lender. This highlights the “cautious” approach from the industry towards the “use of proceeds” which corresponds with the second flaw, mentioned in that published research note.

“Scholars are now more than ever before under more pressure from the public to “scrutinize” the transaction. All these are steps in the right direction. This is something we would not have achieved if it was not for the “Goldman debate”. “Reforming the Sukuk industry starts with one step and that “small step” was the Goldman Sukuk which was delayed for six months since its announcement in October 2011.

“Probably one of the key repercussions we came across after deconstructing the sophisticated structure of the Goldman Sukuk is the reported fatwa from ADIB scholars who sanctioned the impending issuance as nonIslamic, reconfirming at the same time two of the three flaws that were mentioned first in December 2011. “Ever since Islamic finance came into existence, a combination of Sukuk potentially based on Reverse Tawarruq (RT) is unheard of. The Accounting and Auditing Organisation for Islamic Financial Institutions (AAOIFI) does not recognize a RT Sukuk with the coverup of “plain vanilla” Murabaha. AAOIFI urgently needs to update its Sukuk standards in order to keep up with the pace of financial engineering in our industry.

“According to the recent media report, the Irish Stock Exchange is unable to stabilise the tradability of Goldman Sukuk at par, which sanction this Sukuk as nonIslamic. Further, there will be no control over the OTC transactions which means the Sukuk could be traded at market value. “Questions remain whether the scholars, who have signed off the fatwa, would react to such a revelation. If our industry does not react, then a “Dichotomy” of the Sukuk market would be in the making. That being, a SubIslamic debt market called a “Conventional” Sukuk market.